By and large windfoiling is being nudged towards the speed/racing end of the circuit closely backed up by freeride. Nimble and agile kit isn’t quite as common (yet) but it’s out there none the less.

And as I write there does seem to be a slight swing of the pendulum towards the ‘fun’ foiling end of the spectrum and being aboard kit designed with manoeuvrability in mind. (That’s not to say racing can’t be fun…).

No hands fun, by Tez Plavenieks of Windsurfing UK Magazine.

Enter Slingshot (SS) and their easily identifiable windfoiling gear that immediately grabs attention – especially with riders such as Wyatt Miller and his aerial antics. Yet SS aren’t just about the high adrenaline aspect of foiling and wanging big moves. Let’s be honest: this isn’t for everyone either. What Slingshot do believe, however, is having a foil system that’s easily interchangeable (modular) depending on mood/and or conditions combined with a sled that delivers high on the engagement factor is where it’s at.

In 2019 the brand has introduced the Levitator 150 and 160 models aimed specifically at the early intermediate end of the market. I managed to get my hands on the Levitator 150 to put through its paces. In conjunction with the Hoverglide FWind foil set up, featuring SS’s Infinity 76 front wing, it’s kit they say will get you up, flying and loving it quick smart.

Slingshot have put a great deal of effort into their foils. By their own admission they’re trying to make things as simple as possible. Whether you’re into foiling for one discipline or looking to step across to alternative modes of flying the brand’s mantra is:

"1 foil, 5 sports, all abilities, every condition"

Big ups in particular should be given to SS’s website wing selector that makes choosing the right configuration hassle free.

For most progressing foilers, however, the FWind package being looked at here will suffice. As skills increase switching to a longer (90cm) mast and utilising the different wing combos is a way to maximise everything you encounter on the water. From slow carving arcs, to full power foil jumping, wave riding and progressive foilstyle; it’s all available if you want it.

As a hybrid foil, with anodised aluminium fuselage, mast and carbon wings there’s a degree of care/maintenance riders will need to be aware of. Making sure each bolt/screw is adequately lubed will ensure your flight gear doesn’t become stuck fast. Regularly dismantling and re-applying lube is therefore a must.

Looking closer at the FWind foil and riders will notice it isn’t just a piece of gear that’s been cobbled together. For a start the fuselage should prick interests with its ability to be switched and made longer or shorter.

Slingshot’s rear 48cm stabiliser wing is another commendable element as it never needs changing, regardless of whichever front wing riders are using. This keeps thing nice and simple. In essence foilers can swap out front wings akin to changing fins on their standard windsurfing kit. It’s pretty much the same premise.

And the wings themselves, in this case Slingshot’s Infinity 76cm, is a well crafted, large area beast that provides oodles of low end power/lift yet remains composed and balanced with minimal twitch. The downturned gull-like design ensures sharp edges are kept as far away from flyers as possible.

In the Fwind box riders will find all tools and bolts needed for quick assembly. There’re also two different coupling heads: a deep tuttle type and pedestal mast track version that we’re using to pair with the Levitator 150. Again, having the ability to swap out head types and thereby slot into multiple boards is a big tick in the versatility box.

There’s no doubt about it: Slingshot’s approach to windfoil board design certainly makes them eye catching. Super short, boxy tailed with pronounced rail chines gives a very unique aesthetic. Add in Slingshot’s easy adjust footstraps (which I love BTW!), the pedestal foil track box and you have a futuristic shape that’s a million miles away from most windsurfing boards.

Slingshot state that the board’s short length reduces swing weight on the water and is less prone to being affected by wind gusts. This certainly holds true whilst at flight. We will say, however, that many sailors stepping aboard the Levitator 150 for the first time may find it an unusual experience.

Perseverance will pay dividends. It’s also important that you spend some time tuning in the set up correctly. With so many different options there’s an optimum for everyone but it may take a while to get there. Tweaking, followed by a few runs, before further tweaks is the way to nail it. Either that or have an experienced foiler help you out.

The first time aboard the Levitator 150 and Hoverglide FWind combo we weren’t sure what to expect. With the HoverGlide’s short mast the lift from the foil isn’t quite as early as when using the longer 90cm mast – something I’ve later discovered. With its short length the Levitator also doesn’t track/glide quite as efficiently as a longer board. It can yaw (screw upwind) a bit as well if riders aren’t dominant.

We’ve since learned the Levitator 160 is a more efficient sled on these fronts, whereas the 150 responds extremely well in more experienced hands when initial techniques have been improved.

Even with the above said the Hoverglide foil doesn’t take a lot of breeze before it wants to lift. Pumping from the Levitator’s tail it rises with minimal effort and propels riders along at height. A nice trait of the Levitator 150 is how effortless foiling feels. Foiling can be a very intimidating new skill to learn, but Slingshot have done an amazing job at helping the rider conquer their fear by making foiling as easy as possible. It can also be ridden efficiently from the centre line (rather than footstraps) thereby helping anxious flyers get over their reticence.

From all positions both the Hoverglide FWind foil and Levitator 150 retains manners. It’s a combo that doesn’t sweep the pilot along for the ride, thereby scaring he/she witless. It does, however, have enough engagement for sailors to want to progress.

As an aerial gyber the Levitator is easy to bank into a turn and tease the kit round corners. As riders become more proficient then full power entries can be achieved. Just be aware that with such a short nose and minimal rocker any breach will result in a dunking. That said it’s a great combo for learning to corner and offers a refreshing break from the higher aspect race inspired foils currently on offer.

For anyone with manoeuvres in mind then it’s possible aboard the Levitator 150. I started punting round a few foiling loops whilst testing. To be honest the Slingshot Wizard range (and warp Speed wing) is where you’ll get most out of this type of windfoiling but for first attempts the Levitator 150 politely responds and will reward you quickly for solid amounts of male or female fortitude.

For my money Slingshot are nailing it in terms of mass appeal windfoiling. Their interchangeable/modular foil range alone is setting the bar – especially for an alu/carbon hybrid type.

The Levitator 150, with its extremely wide tuning range, is an example of new school windfoil boards and where we could be heading. Balanced, yet nimble, it’s a sled that’ll spark your flying interest and hold it.

Slingshot says that 80% of the visitors to their site participate in more than one category of foiling e.g. kite / windsurf / SUP / Surf / Wake – if you identify with their claim and see yourself ditching the rig when the wind runs out and jumping behind a board for some wake foiling or on a wave for some SUP foiling then you really can’t beat this system for offering the rider great value for money and versatility. 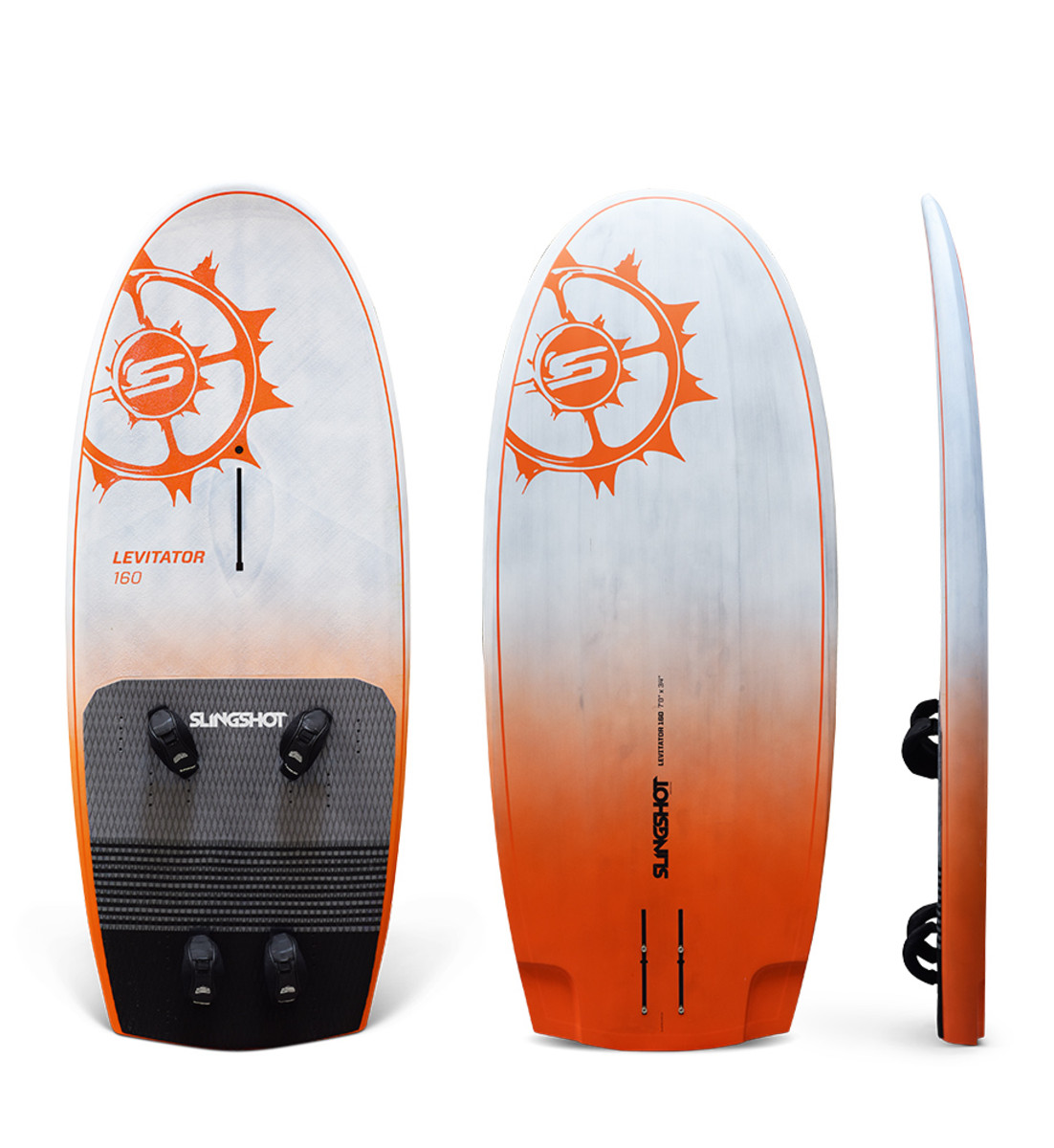 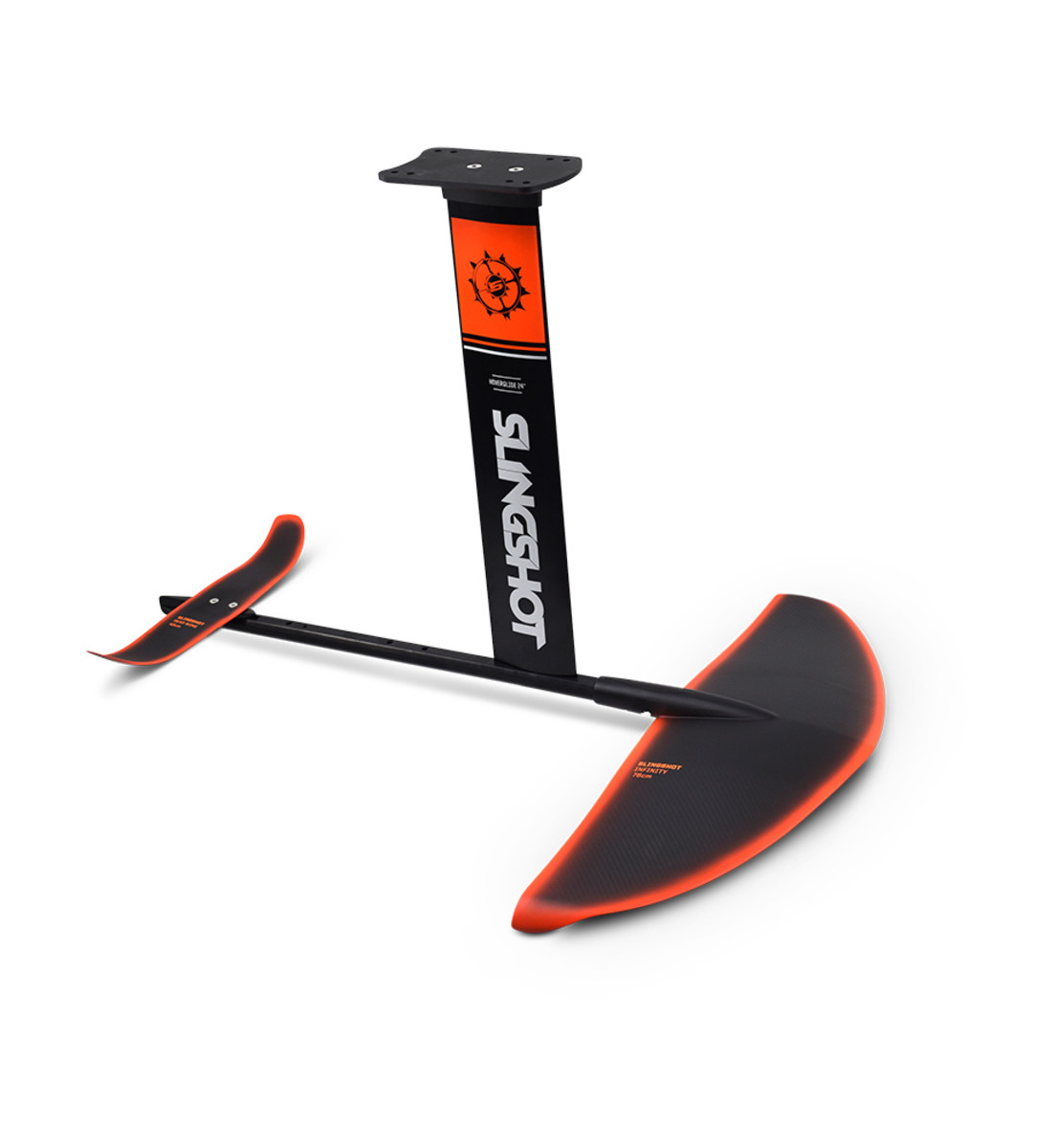 Hit up the magazine and website to stay in the loop with windfoiling goings on, equipment tests and everything else from the colourful world of windsurfing.

Can I Use My Regular Windsurf Board to Windfoil?

5 Board Nose Protections For Your Next Windsurf Foiling Session!

How to Choose the Right Windfoil Equipment – Q&A

Interview With David Ezzy, Designer Of The Hydra Windfoil Sail

Stall speed and its impact on completing the (elusive) windfoil gybe

Windfoiling strapless or not, that is the question!

Learn windfoiling with experts: «What’s the best advice you can give to a beginner?»

Windfoiling for 2024 Olympics with the IQ Foil !

Shipping in Europe only