We are just about to round off the summer, however 2019 is almost over, at least if you’re thinking about windsurfing gear. Many windsurf manufacturers are already ready to kick off the 2020 season with smashing new foiling gear.

Nothing revolutionary so far, but the trend towards two different types of foiling is becoming obvious. While some of the gear is still all about speed and performance, there are more and more freeride or freestyle oriented gear, where the fun factor and the accessibility of the kit is more important than the performance.

(READ ALSO: 4 Different Windfoiling Types, Which One Is Yours?)

I’m very happy to see this evolution, as this makes the sport less elitist and opens foiling to a larger audience.

Here is a glance of some of the exciting things that we can expect to be launched in the very near future:

With the evolution of foiling in different directions, Starboard has now divided its foil range into 3 clear segments with somehow misleading terms:

The Foil X 145 L, combined with a large foil like the Starboard Supercruiser, you will pop up into foil mode with minimal effort, and you’ll be able to learn your way through foil jibes at low speed, making manoeuvres easier than you could ever imagine.

As the wind picks up, from 15 to 25 knots or more, you switch to smaller sails, say between 3.0 and 4.7 and a whole new world opens up with a foiling style that is all about freedom, weightlessness, and style. Recommended for riders up to 100 kg. (Dimensions: 190x71cm)

The Foil X 105 L is more manoeuvrable and playful. It’s probably not a board for foil beginners as it’s quite radical, but it is still user-friendly. You can fly downwind while almost forgetting about your sail and getting a kind of surfboard foiling feeling. With only 182cm in length, its wide outline and super-thick nose still make it possible to uphaul with ease. Dimensions: 182x63cm

As Tiesda You, head designer at Starboard, says:

" It’s no longer about how fast you can go. It’s about how long you can stay on the foil without touching down. From take-off to finish, you are looking at an hour or two of 100% flight time, with foil jibes and some foil 360°s thrown in.”

This is the second generation of Starboard’s freeride foil boards. They are designed to fly at maximum reaching speeds with emphasis on control and performance. Starboard Foil Freeride boards are available in two new sizes: 125 and 150 litres, respectively replacing the 2018 models 122L and 144L.

Compared to the 2019 edition, the tail shape has been changed to give more comfort and a feel of power and control for the rider. The extra wide tail adds stability and allows you to fly with more power. The nose has become slightly shorter and the mast track moved backward.

This improves take off, manoeuvrability, while reducing the board’s swing in the air. The volume distribution is improved to increase stability in flight and while tacking and uphauling.

The new Foil Race 177 is designed for upwind/downwind course racing and PWA foil racing. Successor to the 2018 and 2019 World Champions, it is completely new with massive performance improvements.

The extra-wide tail and increased thickness give you power, control, and stability. Out of a tack or off the start, the 8cm step in the tail reduces the tail’s wetted surface area and the oversized cutaways get you planing super quick for a faster take-off.

Sebastian Kördel on his Starboard Foil Race board

Airflow is improved over the new nose profile and a deep deck concave increases lift, promoting the earliest take-off, adding power in light winds and allowing the nose to be shortened 8cm. This shorter nose reduces swing weight, again helping earlier take-off, it makes the board more responsive, adds control in high winds and gives you more upwind angle.

Check out the Facebook live Gonzalo Costa Hoevel and Remi Vila did in August 2019. The sound quality is unfortunately not the best, but those guys know what they are talking about:

Starboard is unveiling their candidate for the coming sea trials. It’s not a real surprise that Starboard supports a hybrid concept with just one board, one foil, one fin, one sail. Fin or foil, from 5 knots to 35 knots, the iFoil package delivers the ultimate in windsurfing racing performance.

Starboard’s iFoil concept in a nutshell:

iFOIL 95/100: High-performance 100% foil racing board that is capable of upwind/downwind racing on a fin if the conditions get really tough. The iFoil 95 is the all-in-one board submitted to the 2024 Windsurfing Olympic’s Equipment Evaluation Trials and the official one-design board of Wind Foil 1, a new visionary foiling class (see below).

The iFoil 100 is the board with the highest performance by making the most of the maximum 100cm width allowed in Formula Foil discipline.

The iFOIL 91 is the Junior model with its shape based on the iFoil 100 with reduced proportions to adapt to lighter riders.

A new windfoil class: Windfoil one

Windfoil One is the main contestants to Starboard iFoil for the Olympic 2024 tender. Windfoil 1 has finally revealed their project and vision: Their goal is to create an international windfoil racing class supported and grown by the industry for the sailors.

The primary purpose for the class is for it to be the Olympic discipline for 2024, but it is not the only purpose and the class will continue either way.

​Underpinning the concept are basic guiding principles around price, universality, performance, industry backing and simplicity where possible. As such the class is proposed as a combination of one-design components and registered series production components.

Check out the Facebook Live about Windfoil One, which explains every aspect of the concept:

Fanatic has not only changed their branding with a new logo, they have also improved their foiling range. They have kept the Stingray as their dedicated foiling freeride board, the Falcon foil as their race board, and the Gecko and Falcon as their hybrid windsurf / windfoil board.

The Stingray range has been further extended with a new 110 L model.

The Falcon Foil is still dedicated to racing, while freerace foiling is covered by the Falcon Lightwind 159, Falcon TE 130 & 140 and the Jag – which all are designed to get you flying in very light wind, and convertible to a windsurf board when the wind picks up.

The Gecko foil is an accessible hybrid board which has been redesigned for three key sizes (122, 135, 148) for better speed, acceleration and early planning.

No official communication from Severne yet, but rumors and pictures say that a new freeride foil sail called “FoilGlide” is about to be launched.

4 battens and 2 cams on a RDM mast. Very light sail which compete obviously with the Loftsails Skyscape.

The Horue Tiny was probably the first windfoil pocket board when it was launched some years ago. This kind of short and stubby board is now being rolled out by most other the brands (Starboard X, Slingshot 103, RRD pocket…). These kind of boards are allowing short turns and real fun.

With its deep double concave for early planing and its carbon construction, the new Horue Tiny board is very light and has specific reinforcements for intensive windfoil use.

The Tiny has still the same freeride / freemove program as before, but the shape has been rethought and is now slightly more efficient in light wind.

There is also a new centered position for the footstrap at the rear, which enables you to ride with only one rear strap, which is ideal for foilstyle moves or waveriding. 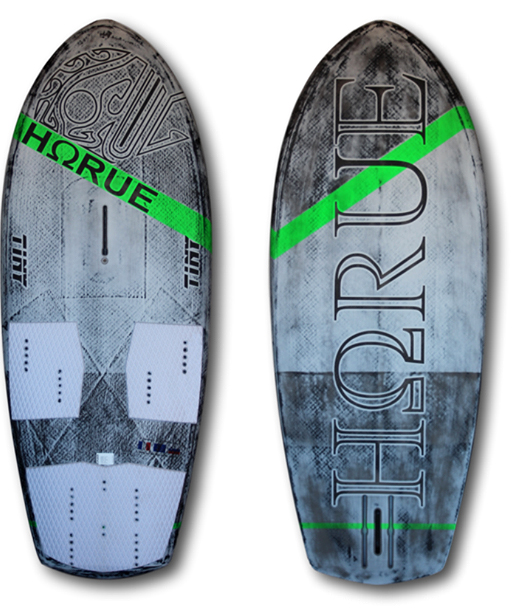 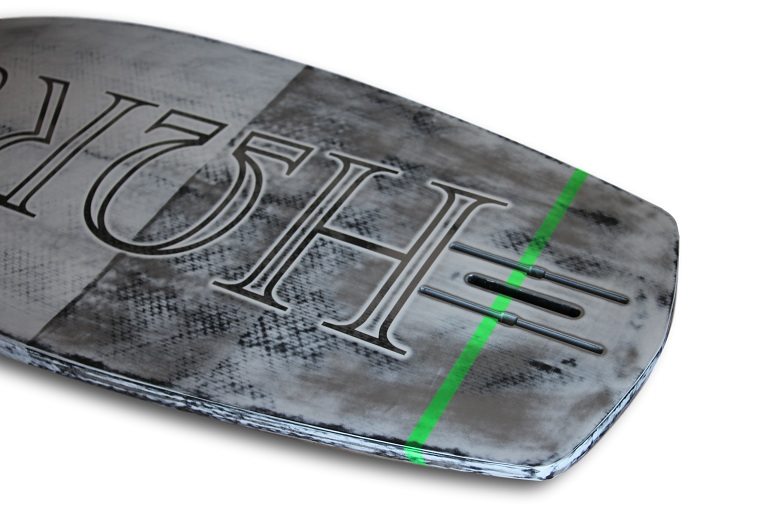 The Micro Hover 131 board is for foil windsurfers who are looking to step up their performance in foiling. It's a lot shorter than its Hover 125/145 counterparts while maintaining volume.

Aiming to decrease as much swing weight in a windsurf foilboard as possible, the all new Micro Hover is Naish’s shortest foilboard, while still maintaining the necessary length and volume to get on a foil, tack, and jibe.

The super wide and compact outline provides an extremely stable platform that gets on a foil instantly. The short length and streamlined profile also gives riders more direct control of the foil for great manoeuvrability.

As with the other models in the Hover windsurf line, the Micro Hover has options for inward footstrap setups for a more oriented feel or outward for a locked in freerace approach with larger sails up to 7.8 m2.

Naish is also launching a new 1150 front wing for 2020, which closes the gap from first time foiling to performance freerace foiling.

The new 1150 front wing builds on Naish’s design philosophy of creating wings that get freeride and freerace windsurf foilers up and riding in the lightest possible conditions with relatively small sails.

The new wing features a higher aspect ratio, refined delta platform, and a unique ‘thin’ foil section that delivers early takeoff, longer easier glides, and improved top speed. Rather than being exclusively focused for upwind/downwind work, this wing also performs exceptionally well on reaches, making it the optimum set-up for the traditional sailing at most locations in the world.

The complete foil includes a user-friendly, though short, 75cm long mast, and a 320 cm2 backwing

All in all, the 2020 foil year looks promising. Lots of new products and real innovations which push the windfoilng sport a step forward.

We are looking forward to test out all these new products and give you our impressions.

We will also update our brand guides as soon as the products hit the market.

Can I Use My Regular Windsurf Board to Windfoil?

5 Board Nose Protections For Your Next Windsurf Foiling Session!

How to Choose the Right Windfoil Equipment – Q&A

Interview With David Ezzy, Designer Of The Hydra Windfoil Sail

Stall speed and its impact on completing the (elusive) windfoil gybe

Windfoiling strapless or not, that is the question!

Learn windfoiling with experts: «What’s the best advice you can give to a beginner?»

Windfoiling for 2024 Olympics with the IQ Foil !

Shipping in Europe only